We have quite a lot of different articles in our blog that prove the effectiveness of review tools in general and Approval Studio in particular. However, the majority of those are quite theoretical, so we decided to publish a small use case.

Approval Studio Pro has been used by Novoe Vrema (New Time) magazine team for the last several months. Our Project Manager has contacted the art director of the magazine – Alex Samovarov – and asked to share his experience.

Alex has been working in the advertising world for over 25 years. He has started as a designer in a magazine and grew up as the art director of a media corporation called “KP Media.” Alex was in charge of visual components of several Ukrainian top periodicals, such as KyivPost and Korrespondent, Afisha, Novynar, Pani, Vona. (These periodicals do not require introduction in Ukraine. Author.)

Some 5 years ago, Alex was invited to create a brand new magazine called Novoe Vremia (New Time) and brought his entire team together with him. Alex is in charge of the visual identity of the magazine – logo, overall design, and brand book. He has also participated in the creation of the online version of the magazine.

Enough with the introduction, and let’s talk to Alex.

Alex, can you tell us a few words about your role in the journal?

Novoe Vremia is a weekly magazine, and it has 60+ pages. Apart from an ordinary visual line, there are 3-4 articles per edition that include infographics – small and big ones. Speaking about the infographic department that I am also related to, we visualize the data that journalists provide us with and try to make it appealing. My role here is to decide on the initial stage what it should look like, what to include, and what are the main elements – the color components, photographs, etc. Then designers create the visual part, and I only control the process. I also participate in creating the cover for the magazine. I mean, coming up with an idea. We brainstorm with the editorial board, chief editor, deputy chief editor, and producer. Then, I start designing it. Usually, there is only one day to accomplish all these tasks. I am also partially in charge of the typographic formatting of the articles in the journal. That’s probably all about my weekly routine.

That sounds a lot for one man. So how come you decided to give a try to Approval Studio when we contacted you at the beginning of the year? You sound like a really busy person and don’t have time to try an app you have never heard of…

It is a cliché, but I’m always open to new offers. You seemed professional guys who dig deep into the problem. I don’t know. I liked it and wanted to try it. Talking about the worst consequences, we would not lose anything. As for the best ones – we would gain some more flexibility, mobility, and accelerated process. We send the journal to printing at midnight on Wednesday, and the deadline sneaks up unnoticed. And your application allows us to aim the efforts on more crucial things but not on paperwork as it was before. We no longer waste our time on that.

Actually, that was my next question. Did Approval Studio help you?

Absolutely! Frankly speaking, I can’t imagine us going back to the way we used to work before Approval Studio. Going back to all those back-and-forth emails and verbal comments that tend to get lost or forgotten – sounds like a nightmare.  (laughs)

And going back to that “before Approval Studio Era,” did you know that you have this kind of problem? I mean lost comments, lost time for paperwork, and so on? Did you try to find the solution to that problem?

Not at all. This was exactly the case when we didn’t know about the problem, and we were offered the solution first. And we really liked the results!

I mean, we might have suspected that we were wasting our time on some things, but we took it for granted. “Well yeah, but what can we do about it?” So, when you offered Approval Studio, we were surprised to get a simple answer to that question. (laughs).

How hard was the transition from your old workflow with emails and everything to Approval Studio?

The same as with every new, unfamiliar app. At first, you click all over the place and try to understand what’s going on. But then you get used to it. And again, I gave you feedback about the things that need to be changed and improved, and you did it. Thanks for listening, by the way. That “hide annotations” button just saves time. We have more than ten of them (annotations) on one illustration, and it was painful to drag all those aside to see the image itself. And now I just hit one button and can see the image, another click, and I see all the annotations.

Well, we haven’t yet implemented all the features. Some of them are still in development.

For the last couple of months, you were using Approval Studio Pro, but originally you had the Lite version. Was this transition hard for you?

The Lite version was totally enough for me, and frankly speaking, I don’t use half of the things the PRO version has to offer. Those features are probably for my team that seemed to like Pro. I only use the few things I need. You know, I have those lanes with projects and tasks. I click on those and do my job. Everything else is done in the background. I only see things I need to do.

Well, I’ll tell you frankly that I do not entirely understand the PRO version. I have three large columns there, and I just go into each task, open, and work in it. LITE suited completely, but the guys may like PRO more. As for me, I do not use all the functionality. I use only what I need.

Everything is great so far, and I’m happy with what we have.

Usually, we promote Approval Studio as a tool for remote teams’ cooperation or for work with external reviewers. We haven’t even started to explain the perks of using Approval Studio for in-house design departments or for internal usage only. Your team, however, is in one building or even floor. What are other things not mentioned above that Approval Studio improved for you?

Probably it’s “peace and quiet” that we have now. No one disturbs you much asking to look at things all the time. You just do your job quietly; everyone is busy with their own business. When you have time, you just open the file for review, add a comment and keep on working on your tasks. The designer is aware of your comments, and you know he is already working on them. I don’t know how to explain this… It doesn’t matter if you are sitting in one room or in different parts of the world, you are working smoothly together.

When it’s quiet in here, we can concentrate more on our tasks. We are less anxious, you know. You don’t need to go anywhere and tell me what you think. You just write it in Approval Studio, and it’s in there. It’s not getting lost. And that’s very important. You don’t need to repeat for the second time. For the third time, just because it slipped out of my mind. Even the slightest thing is in here, and you can’t forget it.

I’ve recently read an interview with Serhii Maidukov, who created illustrations for The Guardian’s cover. He mentioned that he once got 58 emails with change requests. How many of those you have for one work on average? Or how many cycles do you usually have?

It really depends. One artwork might have 3-4 cycles. Some others can have 7 or even 8 versions. You should understand that I’m not the only person reviewing the graphics, and my comments might not be the major ones. There are multiple people asking for changes – some technical aspects or wording or general comments are going from different people on different stages.

(Alex asks his designers about the average number of annotations.).

Yes. On average, we have 6 comments, but sometimes even 20 annotations are possible. And an average number of cycles would be 3—maybe three or four cycles.

The final question. How often do you use Approval Studio comparison modes?

Not that often. We work very fast, as I mentioned, sometimes the whole magic happens within one day. But when we need to check something, it’s a good option to have.

Comparison mode is kind of a cheat mode for Alex and his team. They have a game that is as old as their journal. In every issue of their magazine, they hide one and the same element in the biggest infographics they have. Those people that know about it look for it every week. And believe me, their “Where’s Waldo?” version is very tricky. As Alex told me, the Comparison mode is banned from this game. Otherwise, what’s the interest in the game? I cannot agree more.

I hope our short conversation with Alex was interesting for you to read. Alex and his team help us a lot with their ideas for improvements, and some of the new features you’ve seen in our latest releases were offered by these creative guys and gals. We appreciate their help and encourage you to contact our support with your own ideas on how to make Approval Studio even better.  Don’t be a stranger. Contact us today, and our next story might be about you.

While on lockdown, I have 2 main communication channels with the team – Zoom and Approval Studio. Frankly speaking, we could totally live without Zoom – a few phone calls would be enough. But Approval Studio is something that we could not cope without. Without it, all those change requests would turn into an endless chain of emails, and, as usual, something would be definitely lost. Without Approval Studio, we wouldn’t be able to keep the pace and the high quality of our works.

Alex’s team was lucky to start using Approval Studio way before the lockdown. They have already had the review process optimized with the help of Approval Studio. So if you are not yet using our Review Tool, this is the right time to try it. Set up your free trial account or contact our support team to have a free demo session. We will gladly help to adjust your approval process to the new reality of remote collaboration. 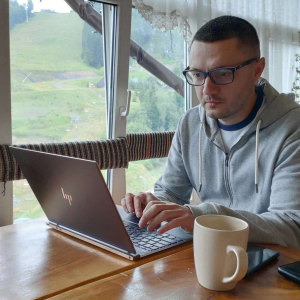 Interviewer and master of all trades behind Approval Studio. Free demos, creative talks, ideas, and lots of communication in general. One project manager to rule them all with a decade of experience in the industry. Knows everything and more about artwork proofing and is more than willing to share this experience with you.
PrevPreviousRelease Notes: April 2020
NextThe Art of the Remote Work: How To Perform From HomeNext